The perception of noise is always a difficult subject. For some, the sound of a Grand Prix race is thrilling and gives enjoyment to many, whereas to others it is annoying and constitutes this sound as a nuisance. The same is typical of loud music. Many younger people enjoy listening to music set at high volumes while it infuriates others. So it is subjective, in some ways it is enjoyed by some but for others, is an unwelcome form of sound pollution such as listening to your neighbour’s television when you are trying to quietly read a book.

It is now well known that excessive sound is a danger to health and can cause stress, sleeplessness, annoyance and many other uncomfortable symptoms.

A rough guide to how it is measured is shown in the table below.

As you can see from the table, anything over 80-85 dB in volume is very uncomfortable and can impair hearing. Lower volumes of noise can also be annoying if it is disturbing, particularly at night. Normally there are two ways to reduce the nuisance. One is to eliminate the sounds at source, giving instant relief or if this is not possible, introduce soundproofing to reduce the noisy nuisance.

Sound travels as spherical ripples through the air much like the ripples created on a pond after a stone has been thrown in. As the ripples travel further away from their source, they reduce in intensity and if they hit a solid barrier or hit reeds, their energy is split up and dissipated in much the same way as sound absorbing materials work. 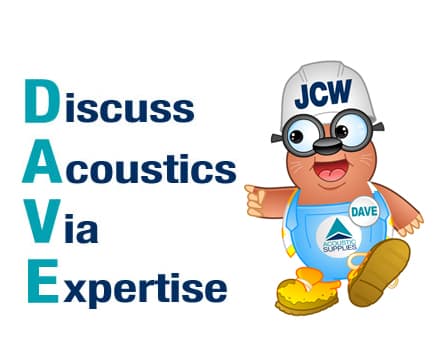 What is airborne noise?

This is sounds that is as the title suggests, airborne and is the type of sound created by speech and radio. Airborne tends to be the most annoying when noise is proving to be a nuisance.

What is impact noise?

Impact  again is as the title suggests and is generated by items coming together such as a door slamming or footsteps over a hard floor. Installation of hard floors in flats is a widespread reason for noise nuisance to neighbours living below flats that have this type of floor installed.

What is flanking noise?

This is more of a problem if the walls are of a lightweight construction, so it is important the correct density blocks are used in the construction of new flats today.

Normally a minimum 7 kilonewton density block is specified today to reduce flanking sound nuisance and also help comply with the current regulations for sound control in flats and other multi-occupied buildings.

What is vibration noise?

Noise from vibration is often a problem and can be caused by something simple such as a washing machine or a more extreme example such as heavy industrial machinery in a factory. Sound from vibration will generate both flanking and airborne depending on its location.